A Setback, But It Could Have Been Worse (Warning: Somewhat graphic image at end of this post)

I resumed the installation of the starboard drogue chainplate this morning. I draped light plastic sheeting around the interior of the engine compartment and over the engine for dust protection and then set to removing paint/gelcoat with a sanding disc on my angle grinder to prepare surface for bonding the backing plate to the hull.

The light plastic was a mistake, as was not wearing work gloves while operating an angle grinder, even if it was in sander mode. The airflow from the high RPM spinning disk sucked the plastic into the shaft of the grinder and, since I was was restraining the plastic by sitting on it on top of the engine, the grinder hauled itself at lightening speed into my left hand before the motor locked up. I didn't feel anything, but when I looked at my hand I was a bit shocked to see a gaping wound and parts of my finger's anatomy that should not see the light of day until I donate my body to science.

Thankfully I didn't hit any major blood vessels, so I got the bleeding under control quickly. I was working alone and there was nobody around the dock to ask for help.  I called the harbormaster's office for help but the person who answered the phone was incompetent and of no use. I had to decide if I should call 911 or drive myself to the ER. I figured I had 15 minutes of adrenaline left in me that was keeping me alert, focused and out of shock. Google Maps said 7 minutes drive time to the hospital, so I decided to drive.  Apart from an agonizingly long red light and not having the right glasses on for driving, I made it to the ER with no major drama.

At first I couldn't move my finger properly and I was worried that I severed its tendon, but it turned out that there was no damage to it or the bone, just an ugly wound. A good wash and 25 stitches later and I was good to go.  The doc and ER team at Kaiser Permanente were really good and I'm grateful for their excellent and prompt care.

Thankfully there has been little pain from the injury, its treatment, or recovery (so far). I won't be able to use my left hand very well until the stitches come out, though.  That's a big setback, as I have lots of work that needs to get done on the boat and was counting on making a lot of progress this month. Back to the drawing board to come up with a revised plan of attack and schedule.

But it could have been worse. Just minutes before the grinder attacked the plastic and me, I had my head bent down deeper into the compartment. I figure that either my cheek or worse, my neck, might have been in the trajectory of the angry tool. Now THAT would have been a really big setback!

As it turned out, I have just ended up temporary augmentation for non-verbal communication to bad drivers and a permanent reminder on the back of my hand to be much more careful when working with tools.  I hope my accident motivates all who read this to think and put safety first when tackling even the most straightforward projects. 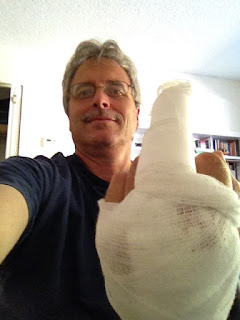 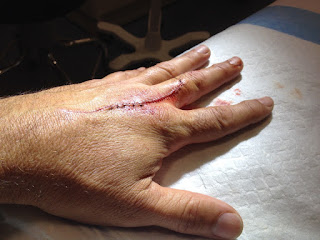