In March 2013, shortly after taking delivery of my new Leopard 39 catamaran Intermezzo in Oakland, California, I posted to the Leopard Catamaran Owners Group on Yahoo! requesting "Boat Outfitting/Fitting Out Recommendations".  This group is a great resource for Leopard cats and I received a lot of good advice from that post and took it into consideration when preparing the boat for our "Sailing Intermezzo" cruise.

Almost six years and over 10,000 nm later, we sat down and had some fun coming up with a Top 20 list of the gear we have on Intermezzo. This is the gear that we find most valuable to us, a subjective evaluation based on personal experience and preferences.

Here is Part 1 of Intermezzo's Top 20 Gear List, ten of the items on the list presented in reverse order of ranking, for a dramatic "countdown" effect: 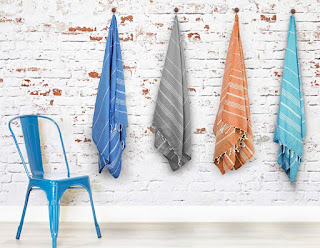 We purchased a set of six Turkish towels from Amazon based on a recommendation in another sailor's blog (so sorry, I can't recall whose). They have been amazing...lightweight, fast drying, durable, colorful.  We use them for the beach, to dry off after a stern shower, between skin and vinyl upholstery to eliminate that Post-it adhesive effect, and wear them as sarongs or shawls. We issue a towel to each person when they come on board and the different colors lets everyone keep track of whose towel is whose. At $48 for six towels with free shipping they are a great bargain. We've had them on board since June 2015 and they look almost new. 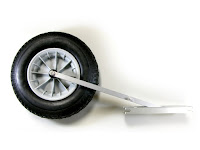 After a year of straining and struggling to haul our dinghy up onto beaches, I finally broke down and bought some dinghy wheels. I had held off doing so because I think they look stupid when not in use; wheels on the stern, pointing up in the air, ruining the dinghy's looks and confounding landlubbers. I'm glad I broke down and bought them. I purchased wheels from Danard Marine Products, the "Cadillac" of dinghy wheels, beautifully machined from aircraft grade aluminum alloy. Down in Panama we had 10 foot tides and shallow sloped beaches, which sometimes required hauling the dinghy hundreds of yards which would have been just about impossible without wheels. The wheels are easy to deploy and make landing and launching the dinghy safer and easier, especially in surf. On the way in, you just power in until the wheels touch bottom, shut off the engine, leap out and haul up onto the beach. On the way out, you wheel the dinghy into the water until the wheels just start lifting off the bottom, start the engine and drive away. In surf, timing is everything and you need to make absolutely sure the engine is off or in neutral whenever bodies or limbs are in the water. These wheels saved our backs and our dinghy's bottom. They were easy to install and are still as good as new. 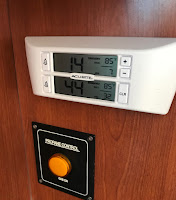 Our AccuRite wireless thermometer lets us know the current temperature of our refrigerator and freezer, the highest and lowest temperatures since the last reset and sounds an alarm if temperatures get too high. We put the wireless sensors in the warmest parts of the fridge and freezer (against the front of the drawers) so we know that average temperatures are lower than those displayed. The thermometer has allowed us to set the fridge thermostat to conserve energy, let us know when there was a problem with the fridge (loose tube connection let refrigerant escape) and when we've accidentally turned off the fridge a few times by bumping into its power switch.  It's a good insurance policy against losing tasty food due to spoilage and having to live off canned crap. 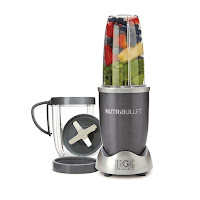 Our NutriBullet blender lets us make healthy, cold, refreshing smoothies. It blends quickly so doesn't use much power and we usually want cold smoothies when its hot and the sun is shining bright and the solar panels are putting out big amps anyway. We typically load it up with frozen spinach, frozen fruit, soy milk and water and let it rip.  It's a great way to eat fruit and vegetables while underway, especially after the fresh stuff has been consumed. The Captain has been known to commandeer the NutriBullet to make Margaritas and Piña Coladas, too. 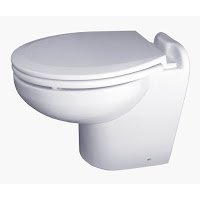 Okay, this is a luxury item, blatant self-indulgence. But when you live on a boat most of the time, pumping a manual head gets pretty old, pretty quickly. Intermezzo's Raritan electric head flushes with just the push of a button. Pure bliss. On a practical note, this head allows us to flush with a small amount of fresh water, eliminating the odors that come with saltwater flushing. The downsides: It's noisy. It doesn't work without electricity. You can't swallow olive pits (don't ask why). We kept the manual head in the other hull as a backup if power fails and to train guests in marine toilet operation. We typically flush that head with fresh water, too. I can't tell you how big a difference this makes in reducing odors and eliminating the need to beat head hoses to get rid of uric acid crystal build up. Our electric head has performed very well with minimal maintenance and Raritan has great customer service.

The Mantus dinghy anchor is like a miniature version of Intermezzo's amazing main Rocna anchor. It has incredible holding power in sand and when I've dropped it into crevices between rocks it's held well, too. I don' think I would enjoy snorkeling or diving from the dinghy without such a good anchor; I'd be afraid I'd surface and the dinghy would be goon. It's light, compact and stows easily in the dinghy's bow compartment. It's held up very well. The only change I'm going to make is to add a six foot length of galvanized chain to the rope rode to help prevent chafe on rocky bottoms. 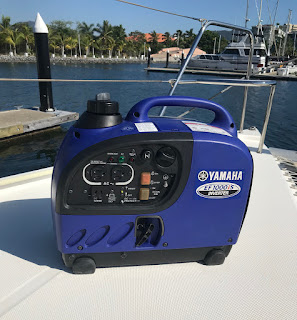 On cloudy days, when our solar panels can't generate enough power, we top off the batteries using a Yamaha portable gas generator. It's rated at a peak output of 1000 watts, but really only puts out a little less than 900 watts continuously. That's plenty to charge the batteries and run the watermaker. It's really quiet under low load, reasonably quiet under high loads. It sips fuel, its 0.66 gallon (2.5 liter) tank lasting for six-plus hours under decent load. It is really small and really light (27 lbs) and stows easily in our bow locker. We've rarely had to use it, but when we have, we've been glad to have it. It is a much more economical way to generate electricity than running one of the diesel engines, both in fuel efficiency and life-cycle costs. It takes advantage of the capabilities of our Victron charger/inverter, which lets us limit the load on the little generator to prevent tripping it's overload switch. My only worries with portable generators are the safety concerns of a floating ground, carbon monoxide and dealing with gasoline fuel. We're just really, really careful about how we hook it up, where we run it and where we store fuel. 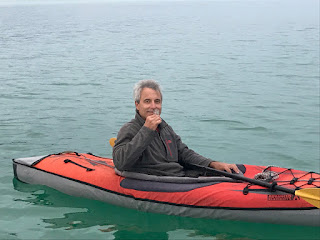 Our Advanced Elements kayaks are just simply the greatest. They are light, stable, paddle well and about the size of a carry-on suitcase when deflated. We've paddled long distances exploring anchorages, rivers, lakes, estuaries and coastlines. We've taking them out in pretty rough conditions and they are very seaworthy. You can fish from them (be careful with hooks!) and drink shots of tequila in them. They are at least a couple years older than Intermezzo and have been used a lot, but still look great (we keep them out of the sun).  They are made in California and the company has been great to work with when we've needed assistance or spare parts. Love these little boats!

12. iPad with Navionics and Raymarine Apps

Intermezzo's iPad is loaded with the Navionics Boating app/charts and Raymarine's RayControl app. The Navionics app and charts give us a redundant means of electronic navigation, independent of our chart plotters. I plan and create routes on the iPad and upload them to the chart plotters wirelessly, which I find much easier than working directly on the chart plotters. They RayControl app lets us operate the boat from inside the salon; we can look at the chart plotter display, monitor radar and control the autopilot. All the apps play well with each other and it's nice to get inside for a break from the helm station every once in a while, particularly on cold night watches. 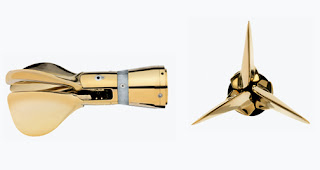 I don't think I can justify my investment in Intermezzo's Gori propellers economically, but I sure do like them. They are very expensive to buy and so are spare parts and anodes. But they move the boat well, be it when cruising or maneuvering. They get 8-plus knots out of our 29 hp Yanmars in calm conditions,  reverse and stop the boat on a dime. They are ingeniously designed and beautifully made; works of industrial art, really. (When I got them, I felt like displaying them in my house like sculptures was more appropriate then hiding them underwater.) In normal mode, they power the boat well through headwinds and heavy seas. When sailing, they fold to reduce drag, probably adding a half knot to boat speed. But what I like best is the "overdrive' mode, which I believe is unique to Gori props. By unfolding the prop in reverse and keeping it in that configuration going forward, the prop is over-pitched for the engine. In calm and moderate conditions, this allows the engines to drive the boat at the same speed at lower rpms. This saves some fuel, which I appreciate, but what I like best is less and lower-frequency engine noise while in overdrive mode. It makes long periods of motoring much more tolerable, especially when sleeping at night.

I'll continue the countdown of the ten remaining items in our Top 20 gear in Part 2. Meanwhile, you can speculate on what earned the #1 spot.
Posted by Steve at 4:45 PM