Leg 4 Wrap Up, With Pictures

When I was planning The Voyage, Leg 4, from Panama to Isla Mujeres was the most daunting to me. It involved the longest distances sailing offshore, possibly into prevailing winds and waves, local squalls, and pirates. It turned out to be one of the easiest and most enjoyable legs.

I credit myself with doing the research to learn that if I waited until May to depart from Panama, prevailing winds would be shifting southward from an undesirable northeast direction to easterlies or even southeast winds. This is what we encountered, one the rare times the weather has done what it is supposed to do for me. I also had developed a robust data set for Intermezzo's fuel consumption, so I knew with a high level of confidence that if the winds did not cooperate, we had the range to motor between our rest stops in Isla Providencia, Grand Cayman and our final destination, Isla Mujeres. Good planning paid off.

Overall, it was great sailing in decent, though sometimes, uncomfortable seas. Scroll back through previous posts to get day-by-day details of the passage. I was surprised that we encountered a weak foul westerly current most of the way (I'm pretty sure) and a strong one that really slowed down the boat (I'm very sure) as we approached Isla Mujeres. I confess to not paying close attention to currents when I have done my passage planning; I will be in the future.

We travelled a total of 970 nautical miles in 9 1/2 days. We sailed 83 percent of the time, a record for Intermezzo, I believe. For comparison, Leg 3, from Puerto Chiapas, Mexico and through the Panama Canal was 1,208 nautical mile passage over 16 days which we sailed only around 40 percent. Nothing significant broke on Leg 4, for which I am grateful.

And now, finally, pictures from Leg 4: 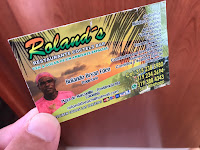