We arrived here at Safe Harbor New Port Cove marina this afternoon where Kyndy left Intermezzo and I await new crew members Amy and Robin and a weather window to cross the Gulf Stream to The Bahamas. This marks the end of another leg of voyaging that began in Hilton Head on January 20th and covered 329 nautical miles.

Our last few days on this leg began with our departure on Thursday from Fort Pierce on a very windy morning. The wind was blowing from the northeast in the mid-20's, with frequent gusts over 30 knots. Fortunately we were headed south, so the wind was at our backs and the constrained waters of the Intracoastal Waterway (ICW) limited waves to a moderate chop, also moving along with us.

We only had two minor incidents along the way. One of our cockpit cushions blew overboard in a big gust of wind. We used it as an opportunity for practicing man overboard recovery skills. I turned the boat around quickly and Kyndy took her position on the stern step as I maneuvered the boat in the windy conditions to bring us alongside the cushion. It was masterful teamwork and we had the cushion back on board less than five minutes after it went over the side.

The other incident involved a motor-barge coming from the other direction, hogging the narrow ICW channel. The big, ugly, rusty steel barge looked like it would leave a mark if it hit Intermezzo, so I edged out of the channel to to let the barge pass. It looked like I had sufficient water depth to continue on my way outside the channel as the barge passed, but suddenly the water shallowed to 5 feet, then 4 feet, then...bump, bump...Intermezzo's keels touched the soft bottom! I quickly applied power and turned towards the channel, hoping to be able to plow my way back into deeper water. Thankfully, that worked and we were back in business. In retrospect, I should have slowed to minimum steerage speed when I left the channel and just let the barge pass me, but at the time, the high winds and ugly, threatening barge motivated me to keep some speed on to make sure I could maneuver quickly if I needed to. Not a bad idea, but sometimes going more slowly is better.

We arrived at Peck Lake, on Hobe Sound and on the inside shore of Jupiter Island in the afternoon. The wind was still howling and there were about half a dozen boats in the anchorage. I found a spot to anchor in the middle of the boats that was deep enough and provided enough room for us to swing at anchor. The proximity of the other boats and the high winds required a precision anchor drop. It was a pretty tricky situation, bringing the boat to and stopping it in just the right spot, then dropping the anchor fast enough to get it on the bottom before the boat was blown off by the wind. We hit the jackpot on the first attempt. Even I was impressed with myself.

The anchor set really well, with extra chain paid out just in case. Despite the high winds all night, we spent a restful night in the relatively calm waters of the anchorage.

The winds had decreased some when we woke up on Friday morning. We let them continue diminishing and then took the dinghy to small beach with a path through the mangroves to the ocean. We enjoyed a run, picnic lunch and relaxing on the beach. The sun was bright and warmed the white sand, taking the chill away from the remaining breeze. In the shelter of a small vegetated sand berm, it was positively warm, bordering on hot. Very nice.

Later in the afternoon, we went on a dinghy safari through a couple of small channels through the mangroves. We saw a lot of herons, an osprey and other waterfowl but not the alligators or manatees I was hoping to see.

This morning we motored to Lake Worth, through developed waterfront land on each side of the channel, many luxurious homes and lots and lots of powerboats. Rude powerboats that could not care less about their large wakes and the danger of high speed weaving in and out of traffic. Really quite horrible.

We had to negotiate seven bascule (draw) bridges, the Hobe Sound Bridge, Jupiter Island Bridge, Jupiter Federal Bridge, Indiantown Road Bridge, Donald Ross Bridge, PGA Boulevard Bridge and, finally, the Parker Bridge to get to Lake Worth. All the bridge tenders were professional, efficient and courteous and we timed our arrivals so as to not have to hover long, waiting for the bridge to open. At the Donald Ross Bridge, a small power boat tried to squeeze alongside Intermezzo as we passed through the bridge opening, very impolitely and risking me having to choose between hitting him or my mast on the bridge. I can tell you which option I would have chosen. The bridge tender radioed me in sympathy, telling me, "You've got to watch those little powerboats; they own the waterway." Today, I wished Intermezzo had the ugly, rusty, steel hull like the barge from Thursday.

There was some confusion as we approached the marina this afternoon as their phones and internet were out and we couldn't contact them to find out where to dock. I'm not sure why this outage also affected their ability to answer their radio, but they didn't. So we hovered and looked around until finally someone on the dock ran up to the marina office to get us some help.

We're tied up on a fixed concrete dock with timber fender piles. I much prefer floating docks, but I imagine they are too vulnerable to hurricanes and that many of the marinas predate that technology. I'm really glad I made some fender boards out of 1 x 6 pine that I purchased back in Portland, Maine. These boards hang down the side of the boat from lines at each end and span across our fenders to hold us off the pilings.

Kyndy cleaned up her side of the boat, started a load of laundry and then was off, a friend picking her up to drive her to Miami where she will catch a plane to Antigua to begin another sailing adventure. I enjoyed her company and she made the trip a much safer and better experience than if I'd done it alone. I think she learned a lot about sailing and living on a boat along the way. I hope she continues developing her skills and becomes the sailor she aspires to be. 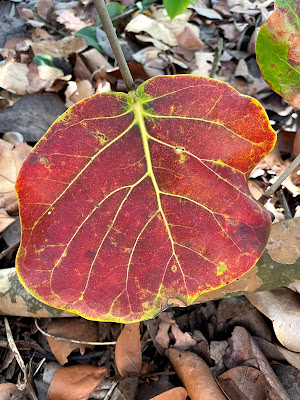 Colorful foilage among the mangroves