Quite a bit has happened since my last post on April 11 from Linderman Key.

At the end of that post I mentioned that the thunderstorms that were forecast had not yet materialized. Well, they did. Suddenly and with gusto!

We watched dark thunderclouds move across the horizon and tracked the storms north of us all afternoon. In the evening the dark clouds came closer and we started seeing lightning bolts five or ten miles away. Then, while I was cooking dinner, all of a sudden a vicious wind started blowing from the west. It rapidly built from 20, to 30, to a steady 40 knots with gusts up to 47, and with the wind, heavy rain, some hail, thunder and lighting.

Our anchor started dragging, so I started both engines to keep the boat pointed into the wind and take some load off the ground tackle, while preparing to cut and run if needed. Fortunately our trusty Rocna anchor bit hard into the grassy sand after dragging only about a 100 feet and held is firmly in place for the rest of the storm.

I captured the following image of our track before, during and after the storm.  The bar showing 98 feet of distance at the lower right hand corner provides a sense of scale. Not the seven foot depth sounding near the center; we were in pretty shallow water. The water stippled with red dots to the right is only two to four feet deep (the lines are one foot depth contours). The arrow head at the lower left corner points north. 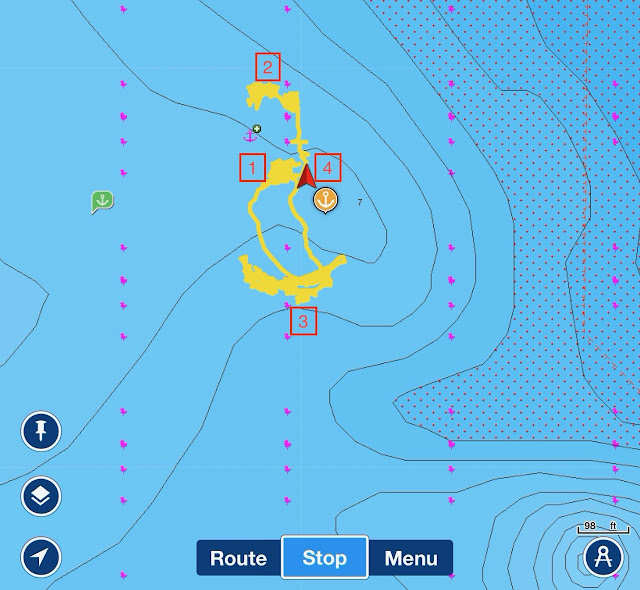 While the storm was blowing, VHF Channel 16, the international hailing and distress frequency, was going crazy. Boats running aground, boats taking on water, capsized boats...it was small boat mayhem out there. Boats from the Coast Guard, Miami-Dade Fire Department, National Park Service and the private rescue service, TowBoat U.S. were scrambling all over the place.

The TowBoat U.S. skipper alerted all the emergency services of the boat he considered to be in the most danger, a 19-foot Mako open center-console boat. It had been blown into the shallows and run aground with eight people on board, including two children and an infant. That type of boat provides virtually not protection from the wind, rain and hail, the air chilly from the cold front causing the bad weather.

The boat in distress was only about a quarter mile from where we were swinging at anchor. The fire department scrambled a helicopter and we watched as it lowered a medic to provide assistance.  Neither the /Coast Guard, the fire boat, nor the TowBoat could find a way through the shallows to help. But the National Park Service ranger, who probably knows the shallow waters better than anybody, managed to thread his way to the Mako, transfer the two women, two children and infant to his boat and bring them to the larger fire boat which had a warm cabin for them. The two men on the Mako, which was now drifting with the rising tide, stayed on board with the Coast Guard standing by until storm calmed and the TowBoat was available to tow them home.

It was quite an amazing rescue to watch and listen to. We sat by wondering if we could use somehow use the dinghy to help but quickly decided it was too dangerous and we could end up becoming part of the problem rather than the solution. We were happy it all turned out well in the end. Kudos to the ranger who persevered to make the rescue and essentially coordinated all the other services by radio.

After all that excitement, we spend the next day in the same spot in nice, but breezy weather.

On Tuesday (April 13) we moved to anchor off Elliott key and walk more of the "Spite Highway" a nice trail which runs the length of the island down its center. The trail got its name as a result of a real estate developer bulldozing a 125 foot wide swath through the island's forest in 1968 just before the island became part of the newly created Biscayne Bay National Park. The key was previously destined to become the City of Islandia, but preservationists saved it from such a fate, obviously pissing off the developer.

Wednesday we had a fast sail from Biscayne Bay to Fort Lauderdale, the wind blowing a steady 15-plus knots from the east, putting us on a close reach the whole 40 miles. We caught the north-flowing Gulf Stream, which boosted our speed to over eight knots, sometimes nine, making for a fast trip.  We anchored in Lake Sylvia, a crowded little anchorage ringed by very expensive homes. Some of the boats anchored with us were pretty nice and in good shape, many others not-so-much. Multi-millionaires looking across their waterfront backyards at a motley band of marine nomads.

During our sail to Fort Lauderdale, I received a call with bad news. The ship onto which I was scheduled to load Intermezzo on April 19 has been delayed. There is a ship leaving on April 25, but there will be no boats on it going to La Paz, so it won't be stopping there. The agent doesn't know when there will be space on a ship going to La Paz, maybe late April, maybe early May. Maybe.

So I am stuck in Fort Lauderdale for an undetermined period. Docks are scarce and very expensive here so I can't leave the boat. I have to sit at anchor in a place I don't like very much for at least 10 days, probably two weeks, maybe longer.

I am feeling very disappointed. It feels like a bit like a short prison sentence, mostly in solitary confinement.

It's not really that big a deal and I absolutely acknowledge that my plight pales laughably compared to the too many who are truly suffering. But, I'll express the reasons for my disappointment, just to get them off my chest: I miss my family and was looking forward to seeing them. I was looking forward to getting off the boat for a little while, after living on board, on the water, for 98 days straight. And I would like to get vaccinated against Covid and I can't while in Florida as I'm not a resident.

There. Done complaining. Now I'll just make the most of however many days I need to wait until my ship comes in. Chalking each one off, like a prisoner in a cell. A nice, comfortable cell.