I arrived in León yesterday right around noon. I spent the morning getting Intermezzo ready to be left at the marina for a couple of weeks and then had an easy under two hour drive here from the marina in a rental car I picked up the day before in the nearby town of Chinandega.

Nicaragua is a poorer country than El Salvador and the second poorest in Latin America (based on GDP per capita), but based on my limited observations so far, Nicaragua seems cleaner (much less litter) and has better, albeit very basic, public services. I'm not sure why that is. Perhaps in has something to do with a long history of socialist politics and relatively recent popular revolution? I hope to learn more as I travel.

The one thing that I don't like in both countries is the burning of sugar cane fields, which is taking place now at the end of the dry season. The air is often very hazy from the smoke and the ash leaves a mess, particularly on Intermezzo's white decks. The countries' beautiful scenery is often blotted out by the smokey haze, which is sometimes thick enough to irritate your throat. It would be great if someone figured out an alternative to burning the fields. Sugar is one of Nicaragua's main exports, so the cane fields aren't going away.

Driving in Nicaragua is pretty relaxed, compared to Mexico. There are far less cars, the roads are pretty good and the driving style is slower and more relaxed. There are a lot of traffic cops, too. I was stopped by one in Chinandega and asked to see my license and other documents. I suspected I might be hassled for a bribe to avoid a citation, but that didn't happen. The cop was professional and friendly. Fortunately, this traffic stop happened after I had just driven the wrong way on one-way street! There were no signs indicating that it was one way, but all the cars facing the opposite direction clued me in pretty quickly and I did a quick 180, no harm done.

I guess one way you can tell a country is poor is when you see horses regularly used as a means of transportation. In Nicaragua, they hitch rather small horses to light metal carts and use them for light hauling of all sorts of goods. The drivers of these carts are pretty adept at guiding them through traffic, speeding them up when needed to keep in the flow. It is a bit shocking when they have to come to a stop quickly, though. I have never before seen a horse skid on its shoes on the pavement to stop the cart behind it and avoid rear ending a car in front of it. I figure the horse as a lot of motivation in this situation, but the coefficient of friction for steel on asphalt is not very high and these horses don't weigh very much so their effort is limited by the laws of physics.

Shortly after arriving in León I enjoyed a nice lunch on the main square, the Parque Central. The restaurant had beer on tap, a real treat. I really grew to dislike the cervezas nacionales (national beers) in El Salvador; they just tasted cheap, which they were. Fortunately, Nicaragua's Victoria Classica is a decent lager and cheap, too. After my lunch and beers, I visited the Museo de Arte Fundación Ortiz-Gurdián, "probably the finest museum of contemporary art in Central America" (Lonely Planet). It is a fine museum, but not all the art is contemporary. The collection is arranged chronologically and begins with paintings from the 16th and 17th centuries.

León is called "the first capital of the revolution" and reminders of its prominence in Nicaragua's tumultuous and violent history are everywhere and I find myself drawn into the Sandinista revolution which overthrew Somoza, the brutal and corrupt dictator, in 1979.  As a child, I was very interested in the Vietnam war and, even as a kid, greatly influenced by the anti-war movement, biased as I might have been by the source of my political commentary being mainly Mad magazine. In 1979 I had just started college and I remember thinking how America's involvement in Nicaragua's civil war seemed like an immoral repeat of supporting an oppressive regime in the name of "winning" the Cold War. I remember being further disgusted by the Reagan administration's subsequent illegal Iran-Contra affair and mining of the Nicaraguan port of Corinto (10 miles from where Intermezzo is presently berthed).

Part of the draw for me is that many, perhaps most, of the Sandinista revolutionaries were around the same age as I was in 1979.  Photographs show young men wearing the same clothes and with similar hairstyles as me and my friends. But there we were, going to college, partying and romancing young women while guys our same age were fighting in the streets for freedom and justice...and no doubt partying and romancing women, too.  It's just a footnote in American history, but still very poignant and significant here.

So, in the Museo de Arte, one of my favorite pieces is the arrangement of the chunks and fragments of a concrete statue of Somoza that was pulled down upon the Sandinista's victory. A video loop of the statue's demise is projected behind the statue's debris on the floor.  Perhaps it's an artifact, not art, but then again, somebody had to think about how they would arrange the chunks in the museum and I think their chunk-arranging was very nicely done.

This morning I did a self-guided walking tour of León, during with I visited La XX1 (The 21), where political prisoners were held and tortured. It is now the home of the Museo de Leyandes and Tradiciones (Legends and Traditions) which is mostly a quirky collection of full size papier-mâché figures from the city's history. However, the history of the prison is told in the background, with simple line drawing scenes of what took place in each rooms painted on the walls. The scenes are poignant reminders, but relegate that dark chapter to the past as the primary exhibits have converted the prison into a happier, lighter space.  It is a tastefully achieved balance.

León is certainly a vibrant, edgy, crumbling colonial city. There are a lot of budget tourists, most young, most from the U.K. and Europe. There a good restaurants and bars and the coffee is great. Lodging, food and transport are inexpensive.  I have felt safe day and night in the center of town and would be comfortable everywhere else during the day, but cautious at night.

I've enjoyed my stay here, but tomorrow I push off the the Northern Highlands, heading to Somoto to check out the headwaters of the Coco River, which flows across the north of Nicaragua and empties into the Caribbean Sea. 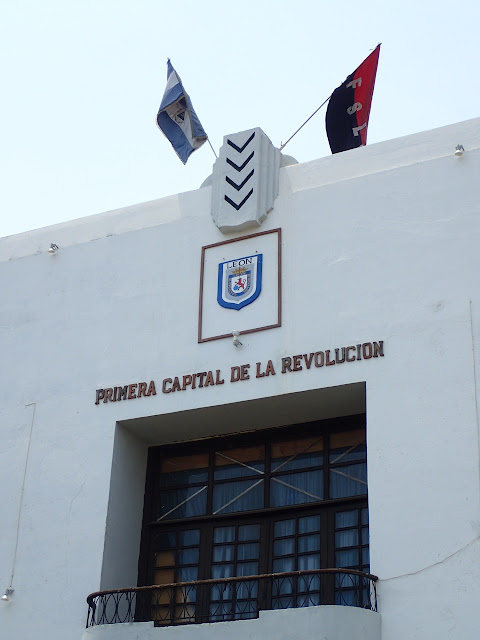