I haven't posted for over a week. Not sure why, a combination of factors I suppose including limited connectivity, sailing solo and distractions.  I'm going to catch up with a travelogue summary of the days since my last post on August 25, the narrative interspersed with relevant photos.

I got in contact with my Instagram friend, Rebecca. She's a student at Maine Maritime Academy (MMA), an artist and a pretty bad-ass young woman who has been restoring a vintage steel yawl, Cu-Mara. I have been following the work she has been doing on the boat, single handed, all summer. It's been an impressive display of energy, perseverance and making a dream come true on a shoestring budget. The boat has beautiful lines and Rebecca applied her artistic talent to the selection of colors and artwork on the bows, a cu mara, a sea wolf, being ridden by a woman on each side.

I wanted to Rebecca in person and lend a hand if I could. I took the dinghy over to Cu-Mara's mooring in windy, rough and chilly conditions. I arrived to a hearty greeting and capable hands took hold of the painter and made us fast to the boat. In addition to having sailed her previous boat, Dolphin, some considerable distance, including some single-handed passages, Rebecca is the chief mate on Bowdoin, the official vessel of the State of Maine and MMA's flagship. Bowdoin was built in 1921 with  a double wood hull for arctic exploration and has made three trips above the Artic Circle.

It turned out there was some work I could assist with, the installation of a new engine throttle and shift control. We worked out how to install it, dry-fitted it and tested it before quitting to get out of the strong breeze.

We finished the installation of the engine controls in the morning, during which I got a quick tour of the MMA waterfront and shop buildings when we went ashore to get some hardware needed.

I wanted to head further north, knowing there was something beautiful to see there but feeling a bit down and uncertain, so I stayed in Castine and worked on Intermezzo. The weather had calmed down and it was peaceful and comfortable at anchor. I would later regret my decision to not push onward, but no use crying over spilt milk. 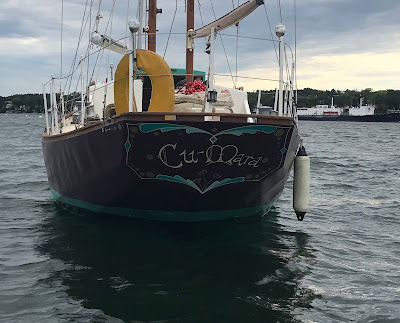 I headed just a little north to Bucks Harbor, a pretty little spot that my friend John had recommended for its outdoor showers overlooking the water, which I enjoyed. I took a mooring ball and spent a warm sunny afternoon lounging about. It was nice, but I really wished I had figured things out better and spent time further north, for the next day I had to return to Rockland to pick up Lisa who was returning from shore leave and the opportunity was gone for at least this time round.

My single-handed sail back to Rockland was a challenge with winds around 20 knots, heavy rain, reduced visibility and very cool temperatures. I wore my heavy foul weather jacket for the first time. Despite the conditions I enjoyed myself immensely, really having to focus, plan ahead and move quickly and carefully on the boat, like a marine ballet with no audience.

By the time I dropped anchor in Rockland in the early afternoon, I was pretty damp and cold, bordering on shivering. I dried off, had a warm drink fortified with rum and relaxed in the salon watching the rain come down. Fortunately, when Lisa's bus arrived, the rain had eased off to a light mist and the temperature was warmer so the dinghy ride to collect her was much more pleasant than it could have been.

We motored in gusty winds the five miles north to the small harbor of Rockport. There was no room to anchor, so we looked for a transient mooring ball. They really pack the boats into this harbor and it took us a little while to figure out which balls were available and then which ones were suitable for Intermezzo's length. We had a couple of "go arounds" before we found a suitable mooring ball and it was really tricky getting attached in the 20 knot wind with 30 knot gusts! We almost got it the first time, but the pennant slipped off the bow cleat at the last second and we had to pick it up again.  All told, it took us almost two hours to reconnaissance the harbor, search for the right mooring and get hooked up.  I so much prefer anchoring.

I strolled around Rockport and had late lunch with a nice glass of Chardonnay, while Lisa went on a bike ride to tour nearby Camden. By the time she returned and the sun had gone down, it was quite cold out.

We spent most of the day sailing from Rockport to Port Clyde, about 28 nm down the coast. It was an upwind sail, close hauled. I tried trimming the sails differently, moving the jib cars further aft and using the traveler to trim the main rather than the sheet, which I kept pretty tight. It worked great, the best upwind sail ever on Intermezzo. Lesson learned!

We walked around the nice waterfront town, visited the Marshall Lighthouse (the land's end where Forrest Gump finishes his run across the country) and bought a couple lobsters off a boat for dinner.

September 1, Monhegan Island
We left Intermezzo at anchor in Port Clyde and took the ferry to Monhegan Island, about an hour's ride offshore. There is a small village on the island where the ferry docks, only a few cars and the rest of the island is just open space, criss-crossed with hiking trails. We hiked the perimiter of the island along some high cliffs. It was a beautiful day, sunny and warm. The hike took us a few hours and I finished it up with a nice local brew.

Lisa did a 20 mile bike ride while I attended to my end of month finances and administrative tasks. I've really fallen behind on my "To Do" list and need to get back on track.

We motored from Port Clyde to Boothbay, another 22 nm southward along the coast. We anchored just outside the mooring field and took the dinghy into town. We enjoyed a nice walk along an "outdoor museum" trail which featured two dozen placards with historic photographs at points of interest along walk. I picked up some nice oysters and pastries along the way.

Boothbay is a nice town and the historic walk was interesting, but it is too touristy for me.  We decided we would move on the next day.

We originally headed to Christmas Cove from Boothbay on John's advice, but as we approached the cove decided it was too crowded and looked for somewhere else to go. What a great decision!

We headed about four miles up the Damariscotta River and turned into long narrow Seal Cove. What a pretty place, a rock- and tree-lined shore with a few houses, rocky islets covered at high tide, a dozen small grey seals swimming around and very few people.  We explored in the kayaks, enjoying the sheltered sunny warmth and peacefulness of the cove.

Later in the afternoon, I had a couple of business calls which made me feel productive and as if I was living in the real world.

We tried our luck at clamming this moring at low tide but didn't have the "digger" required to get to the clams buried deep in the mud.  I did manage to harvest a dozen-and-a-half fat mussels though. We spent the rest of the morning drifting back to Intermezzo in the dinghy, lounging in the sun and enjoying the scenery. I tried to line up the dinghy with wind and current so that we would drift directly to the boat with no rowing and actually pulled it off! We bumped right into one of the bows.

Later, Lisa saw a lobster boat pulling up traps and jumped in the dinghy to see if she could get some lobsters. She came back with two small ones which, together with the mussels, made for a nice dinner.

Early tomorrow morning,we set off for Portland where we'll put Intermezzo into slip in a marina for 10 days while I fly back to California for a business meeting and to visit family. It will be the first time lying at a dock since we left Strong's Yacht Center on July 14th. I'll have slept a consecutive 71 days on the water.