We successfully launched Intermezzo yesterday and motored up the Canal de La Paz to Marina Palmira, Intermezzo’s home port for the next couple of months. I appreciated assistance from Roy, a potential crew member for The Voyage who drove up from Cabo to help and get acquainted with me and the boat.

The launch went well as I had arranged with a nearby boat yard to have several helpers on the boat in addition to Roy to help guide Intermezzo into the travelift slipway, which is only a couple of feet wider than Intermezzo’s maximum beam (width). It was high tide, conditions were calm and what little wind there was, was on the nose. It all made for an easy launch.

The only minor hiccup was the port engine not turning over when the boat got in the water. I had checked both starting batteries the day before and they had discharged quite a bit during six months of storage. I connected them to the house bank to charge them via the solar panels for the whole day and they both checked out with over 12 volts by evening.  I was pretty confident that they would have enough juice to start the engines, but just to be sure I didn’t end up in an awkward situation in the slipway, I bought a small jump starter battery pack at the nearby Autozone shop. When it came time to start the engines, the starboard engine started up after a few revolutions but the port engine just went “click”. No worries, though. Roy jumped into the engine compartment, quickly connected the jump start pack and a few seconds later, the port engine was chugging along nicely.  I highly recommend having one of these jump start packs on board if your house batteries are too far away from the starting batteries to use jumper cables, as they are on Intermezzo.

The port battery has been worrying me , seeming to lack cranking power compared to the starboard battery for the past year. I’ll bring both batteries into the shop for testing and maybe they can be renewed by applying an equalizing charge, a high voltage charging that gets the sulfates off the lead mats. I hope that works rather than replacing the batteries here because I am a devout believer in Lifeline batteries, a brand that is difficult to get in Mexico and expensive if you can find them.

It was nice motoring to Marina Palmira with Roy on beautiful sunny day with a gentle breeze. Roy is enthusiastic, attentive, fit and has a solid set of skills from his diverse work experience in the oil industry, but he hasn’t sailed much. I used our short trip to acquaint him with aids to navigation (buoys) and rules of the road. I explained that even if a stand on vessel has right of way over a burdened vessel, the stand on vessel must take action to avoid collision if necessary. Right after explaining this, I had to speed Intermezzo up to avoid a collision with a panga to our port (the burdened vessel) commanded by a solo fisherman who was messing with his fishing gear instead of steering his boat. I told Roy, “See, that was just like a power boater from Alberta. You can’t trust them.” Roy is Canadian, from near Edmonton.

It felt good to sleep in my berth on Intermezzo last night. I still have to unpack a bunch of stuff and put things in their proper place, but the boat feels like home again.  I went shopping at the Saturday street market today and filled the fridge and larder with fresh vegetables, staple ingredients for meals, a few bottles of wine and a bottle of rum.

Now to tackle the long list of pre-Voyage projects. 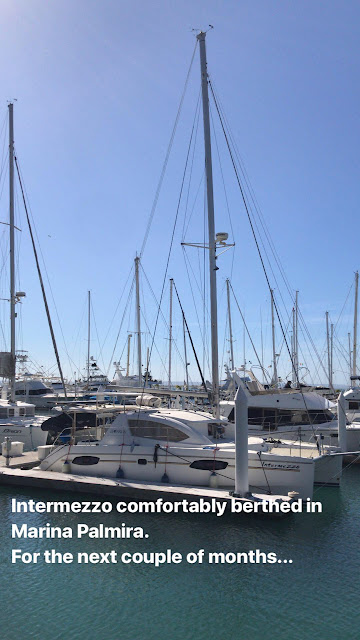